Why ladies are still single (adapted from traycee)

11 answers to this question.

2. Handsome men are not nice.

3. Handsome and nice men are gay.

5. Men who are not so handsome, but are nice men have no money.

6. Men who are not so handsome, but are nice men with money think we are only after their money.


7. Handsome men without money are after our money.

8. Handsome men, who are not so nice and somewhat heterosexual, don't think we are beautiful enough.

9. Men who think we are beautiful, that are heterosexual, somewhat nice and have money, are cowards.

10. Men who are somewhat handsome, somewhat nice and have some money and thank God are heterosexual, are shy and never make the first move.


11. Men who never make the first move, automatically lose interest in us when we take the initiative.


'Men are like a fine wine. They all start out like grapes, and it's our
job to stomp on them and keep them in the dark until they mature into
something you'd like to have dinner with.'
Don't you just have to agree?

3. A lady must always be protected by THE MAN.(hello we can defend ourselves thank you. all we need is just some cuddling and make-out session. we are miss independent too ya noe?)

5. To Men, the only two places a woman is worth her while, is in the kitchen and bedroom. (deepak, me n tracy will kill you soon!)

7. If a Lady appears to be too interested, she is labelled as a DESPERADO, therefore Men might also run away as fast as they can to the opposite direction. (see its wrong both ways)

8. Ladies spends too much money on shopping while its okay for Men to waste their money on some nonsensical gadget which they do not even know how to use. (i rather choose clothes and jimmy choos over some software programme!) 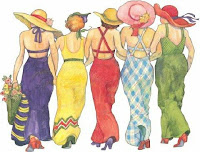 Posted by madellkcl at 1:58 AM