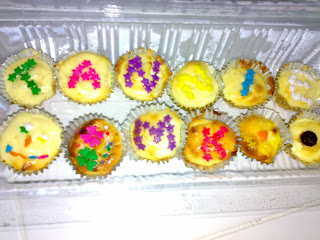 please tell me that this lil cheese cakes are cute and MK stands for me.

to the guy i'll call my babi because he is well a babi,
mr arsehole,
the only person in the world who thinks and actually believes that my name is madeline khaw mei ling *points the middle finger at him*
and to him MK stands for may kwoon after i spent hours baking and decorating those bloody lil mini-cheesecakes, *slaps and punches him*

he also happens to be the one that will come over to my rescue at any ungodly hour just because i was down, emo, really in deep shit or just not wanting to be at home,
(we have withstood whatever 3-am friendship tests, we've been passed with flying colours in every 1am,3am,5am,6am whatever time tests)
the one who never judged,
the one i do not need to impress.
the one that will the there,
my mr bestie. 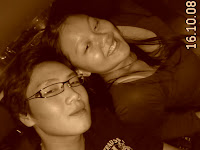 p/s-no, you are no longer a teenager, so stop calling yourself twenteen =.='

i had violin in the afternoon yesterday,
then went over to mab's with ting to talk and pass her the lil cheesecakes,
and then it was dinner with ting,tzouen,alyn and chungkhye.
had very nice fried oysters at seahorse kopitiam (next to penang chinese swimming club)
and then they all came over to my house to chill and we decided to re-watch TAXI.
by 11.30pm they all went home.

it was time to surprise tannie so i acted all emo and called him up,
he arrived in like less than 10 mins
he really believed that i was having a mega huge fight with mum and was planning to runaway from my house with two huge bags of clothes (honey, im not the kinda girl who runs away from home or commits suicide! dont you know me well enough?)
so off we went to sunset bistro,
and then it was so hard to get him to leave the table.
aiks.
so i gave up and just took those lil cheesecakes out.
SO NO I DID NOT FORGET YOUR BIRTHDAY, now dont you dare to forget mine!

it was fun just us talking, laughing and chilling underneath the blanket of stars.
oh new found hobby: throwing bottles! =D

and i would like to thank god for keeping an eye on my handphone for me! AMEN!

you took the bloody effort to bake him those little mini cupcakes yet didnt see it fit to do anything on mine??? GASP!!

im taking offense on this one hun =P

I WAS HAVING PROM.

i won prom queen just for you k?
isnt that more than cheesecake? (they are not cupcakes, they are lil cheesecakes specially made to look lk cupcakes)

we'll go eat when ur back!
miss u!